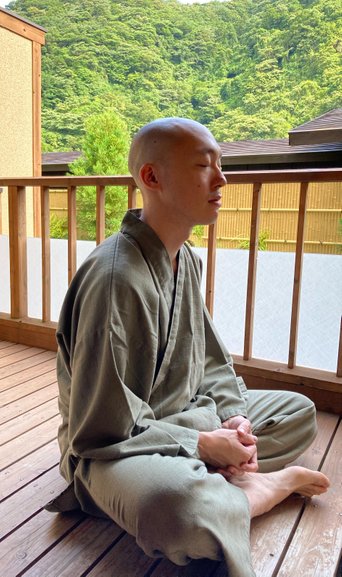 Takashi Oda is a Japanese artist born in Taiwan in February 7th 1991. By growing up in The Netherlands, and coming back to Japan, he gradually feels the entrapment and the conservative mind in himself and in the Japanese people.

He faces the unwillingness for his job at the Chemical Engineering Company, which was his first after graduate job. Even though he does not have an educational background by art, by his continuous try & error with his artwork, he gradually starts to sell his artwork. 2017, he choses to quit his job with his wife, and challenges selling his artwork in Australia’s streets, by using Crowd Funding .(Succeeds by gaining 70 people’s support.) Not only he continued selling art in Australia and in Japan, he made an artist team “MINAHYO” with 130 members and held art events and projects around Japan.

Now he aims to break through the conservative mind in Japan, and his dream is to “Make All People an Artist”.

He established an after school “T-KIDS” with 20 inspiring classes (such as Universe class, Art class, Philosophy class, etc.) to make the kids find a way to follow their hearts.

Takashi’s artwork is just a sideline, and a by-product.

He does not aim to do art. His art is something that comes out while he is challenging towards his dreams,  “Make All People an Artist”. If the artwork is sold, its a by-product with value, same as natural fertilizer. But if the art is not sold, it’s the same as nuclear waste, and garbage. Human beings are the only living things that produces garbage. Artist Oda will keep facing this fact, and will send a message to the world about the capitalism and by-product.

All the things are by-products. Even lives too. Its not a purpose. It just comes out. If the by-product comes out anyway, then lets face it and mean it.

#TO.02 Title: Breaking through Japanese Conservativeness